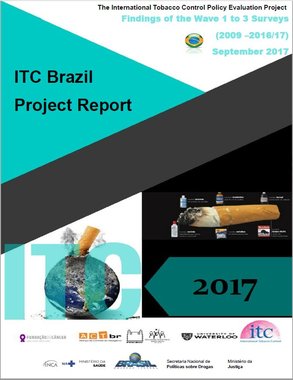 This report presents findings from the ITC Brazil Survey. Between 2009 and 2016-17, three survey waves were conducted among a cohort of 1,200 adult smokers and 600 non-smokers in Rio de Janerio, São Paulo, and Porto Alegre.

This report has been translated to Portugese.

49% of Brazilian smokers plan to quit in the next 6 months, the highest among all countries surveyed

Rio de Janeiro, September 29, 2017 - Brazilian smokers are highly motivated to stop smoking and strongly support new governmental actions for smoking cessation, according to the ITC Brazil Project, a survey that measures the psychosocial and behavioral impact of policies for tobacco control. The results of the study were announced at the INCA 80 Years Congress. Brazil has the highest percentage (49%) of smokers who plan to quit in the next 6 months in the 25 countries surveyed (in three countries this question was not asked). The percentage is quite high, especially compared to developed countries with structured tobacco control programs such as the USA (37%), France (34%), England (33%) and Germany (10%).

The ITC study indicates that smokers and non-smokers support the creation of new government actions to stop smoking. There is strong support even for a total ban on the marketing of tobacco products - something that is not on the agenda, but demonstrates the approval of the State's action in the control of smoking. The ITC Project asked all respondents whether they support or oppose a total ban on tobacco products over the next 10 years as the government would provide treatment to help smokers quit. The results show that 68% of smokers and 77% of non-smokers surveyed "support" or "strongly support" this prohibition.

"There was a change in the social acceptance of smoking, which was well-seen and widely stimulated in Brazil between the 1970s and 1990s. This change is the result of extensive work by INCA and the Ministry of Health, in partnership with secretaries Health and Civil Society,"

said Tânia Cavalcante, executive secretary of Conicq / INCA. "Our challenge is to increase the access of these smokers to smoking cessation treatment, which is one of the most cost-effective medical interventions."