Home » Findings » Fact Sheets and Infographics » May 2015 | Pictorial Health Warnings in India: Why Larger Warnings Should be Implemented Without... 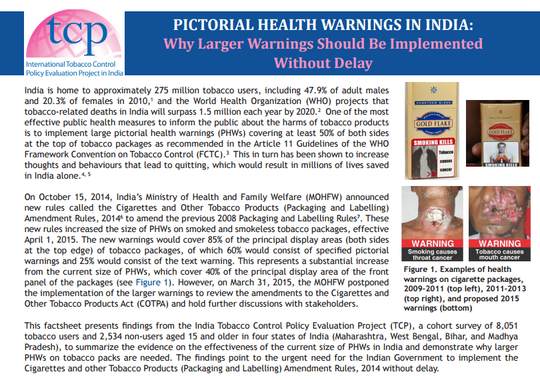 May 2015 | Pictorial Health Warnings in India: Why Larger Warnings Should be Implemented Without Delay | Fact Sheet | English

In March of 2015, India's Ministry of Health and Family Welfare (MOHFW) announced that they are delaying implementation of larger pictorial health warnings (increasing from 40% of the front to 85% of the front and back of the pack), as was previously proposed for April 1, 2015 in the Cigarettes and other Tobacco Products (Prohibition of Advertisement and Regulation of Trade and Commerce, Production, Supply and Distribution) Amendment Act, 2014, in order to hold further discussions with stakeholders.

The ITC Project has pulled together our findings from the TCP India Wave 1 Survey in an effort to urge the Indian government to proceed with the pictorial health warning size increase. The TCP India Wave 1 Fact Sheet is available for download here: India Warning Labels Fact Sheet- May 26 2015