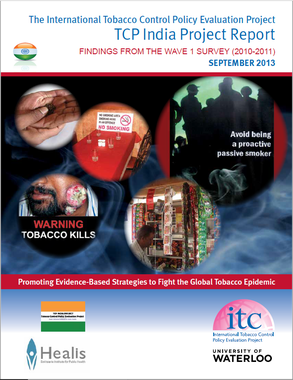 This report provides details of how TCP India Survey is conducted in four states, namely Maharashtra, Madhya Pradesh, Bihar, and West Bengal. The Survey is conducted by researchers from the Healis-Sekhsaria Institute for Public Health, Navi Mumbai, Maharashtra in collaboration with their partners in Madhya Pradesh, Bihar, and West Bengal and the ITC Project team centered at the University of Waterloo in Canada. The TCP India Survey is a prospective cohort study of adult (aged 15 years and older) tobacco users and tobacco non-users.

*ACROSS SURVEYED STATES, BETWEEN 23 AND 47 PERCENT OF ADULTS ARE TOBACCO USERS; THE PROPORTION OF TOBACCO USERS WHO ARE READY TO QUIT VARIES BETWEEN 6 AND 27 PERCENT*

* EXPERTS PREDICT INDIA WILL HAVE AN ANNUAL TOLL OF 1.5 MILLION TOBACCO-RELATED DEATHS BY 2020 *

(Thursday September 12th, 2013, New Delhi, India and Waterloo, Ontario, Canada): The Tobacco Control Policy Evaluation Project India (the TCP India Project) today revealed the results of a study (the TCP India Survey) of the effectiveness and impacts of tobacco control legislation in India. The Report finds that while India has been a regional leader in implementing tobacco control legislation over the previous decade, a combination of factors including low levels of awareness of the risks of tobacco use, partial rather than comprehensive smokefree legislation, poor enforcement of existing smokefree laws and the relative affordability of tobacco means that few current tobacco users say they are ready to quit.

The TCP India Survey conducted face to face interviews with 8000 tobacco users and 2400 non-tobacco users across four States – focusing upon one city and its surrounding rural district in each state. The states and cities were; Bihar (Patna), Madhya Pradesh (Indore), Maharashtra (Mumbai) and West Bengal (Kolkata). Researchers found that:

Dr. Prakash Gupta, Managing Director, Healis-Sekhsaria Institute for Public Health, Navi Mumbai, India and Principal Investigator of the TCP India Project, said: “Tobacco use – in the form of cigarettes and smokeless tobacco products – is a real problem in India and several of the headline figures from this survey are a real cause for concern. Many tobacco users are not aware that smokefree laws have been implemented in their state. And so it is not surprising that we see high levels of non-compliance. The fact that there are exemptions to the smokefree laws adds to this confusion, so we would urge the adoption of fully comprehensive smokefree laws. Similarly, it is necessary for us to do more to restrict tobacco advertising, marketing, and promotion and to raise awareness of the real risks of tobacco use. However, the research also uncovered causes for optimism: the majority of tobacco users regret taking up the use of tobacco and view tobacco use negatively. There is a majority of tobacco users and non-users in favor of comprehensive smokefree laws. The majority of tobacco users want more health information to appear on warning labels; more than half of smokers (65 to 76 percent) and smokeless users (58 to 77 percent) thought that there should be more health information on smoked and smokeless tobacco packages. This provides India’s legislators with a clear remit to strengthen tobacco control policies and enforce them in a more robust way in order to improve public health and reduce mortality associated with tobacco use.”

Professor Geoffrey T. Fong of the University of Waterloo in Canada, Chief Principal Investigator of the ITC Project, the international research collaboration that is evaluating the impact of Framework Convention on Tobacco Control policies in 22 countries, said: “Compared with many countries around the world, India has been proactive in introducing tobacco control legislation since 2003 and in fact the country ratified the Framework Convention on Tobacco Control in 2004. In 2009, India became the first country to implement warnings on smokeless tobacco packages and in 2011 it implemented the world’s strongest restrictions on the display and use of tobacco products in films – a significant step in a country that is host to the world’s biggest film industry. However, according to this study the legislation currently in place is not delivering the desired results – in terms of dissuading tobacco use and encouraging quitting – that might be expected. Of all the 22 ITC Project countries, tobacco users in India are least likely to intend to quit, with 75 percent to 94 percent of smokers, and 73 per cent to 94 per cent of smokeless users having no plans to quit using their respective products. This is important because intention to quit is the strongest predictor, or one of the strongest predictors, of whether a smoker will attempt to quit. These very low intention rates in India are a harbinger of continued smoking for an overwhelming majority of smokers – and that will impact the number of deaths from tobacco use. If there is any single indicator of the urgent need for continued and strengthened efforts for strong, evidence-based tobacco control in India - this is it.

Professor Fong continued: “Tobacco users in India are also less likely to think about the health risks of smoking because of warning labels. Only 4 per cent of tobacco users in Maharashtra (Mumbai) think about the health risks of smoking – the second lowest among all ITC countries/jurisdictions. Awareness of the real risks of tobacco use is comparatively low. While tobacco users are aware of the risk of cancer to users of tobacco products, fewer are aware of the risk of heart disease; tobacco users in Madhya Pradesh have the lowest level of knowledge of any country/jurisdiction across the ITC Project and those in Maharashtra have the third-lowest levels of knowledge regarding the risks of tobacco. This lack of knowledge also applies to awareness of the risks of secondhand smoke to children. In all four states, we also found that the price of smoked or smokeless tobacco products, and restrictions on smoking or using smokeless tobacco at work were cited by less than half of current smokers and current smokeless users as important reasons to think about quitting. Again, this is low compared with other ITC Project countries and indicates that current smokefree laws and tobacco pricing are not providing strong motivation for tobacco users to think about quitting. In order to decrease morbidity and mortality from tobacco use in India, we recommend the adoption of strategies that have proved to be successful in other ITC countries, including increasing the price of tobacco products, enforcing comprehensive smokefree laws and raising awareness of the risks of tobacco use through larger graphic warnings and mass media campaigns.”

The findings of the TCP India Project are based upon the TCP India Wave 1 Survey, which polled representative samples of tobacco users (both users of smokeless tobacco and users of smoked tobacco—including cigarettes, and bidis, the more popular smaller and much less expensive smoked tobacco products) and non-tobacco users in four major cities in four states—Maharashtra, Madhya Pradesh, Bihar, and West Bengal—and the surrounding rural districts between August 2010 and December 2011. The survey was conducted by researchers from the Healis-Sekhsaria Institute for Public Health in India in partnership with the International Tobacco Control Policy Evaluation Project (the ITC Project) at the University of Waterloo. India is one of more than 20 countries that are undertaking cohort surveys as part of the ITC Project.