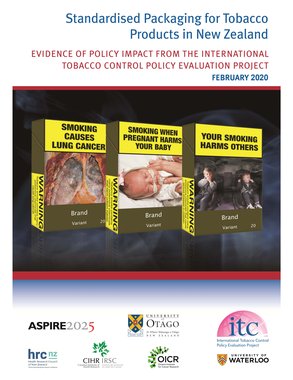 The researchers found the introduction of standardised (plain) packs and enhanced warning labels in 2018, resulted in smokers disliking the look of their packs and looking at the pictorial health warning labels more often.

The International Tobacco Control Policy Evaluation (ITC) New Zealand Project surveyed 910 (2016-17) and 726 (2018) smokers, more than 300 of whom identified as Māori. Participants were recruited from the nationally representative New Zealand Health Survey and were asked about their reactions to cigarette and roll-your-own packaging in the year before the introduction of plain packaging, and again immediately after implementation.

The proportion of smokers who did not like the look of their pack increased from 50 per cent to 75 per cent, and the proportion who noticed the warning labels first when looking at their pack instead of other aspects of the pack - such as branding - doubled from 24 per cent to 48 per cent.

Changes in several other indicators also suggested the new packs were reducing the appeal of tobacco products and increasing the visibility of the pictorial warning labels. The findings were similar among Māori and non-Māori smokers.

The principal investigator of the study and co-director of the ASPIRE 2025 smoke-free research group, Professor Richard Edwards, says the study adds to the evidence that plain packs are effective. However, he cautions that New Zealand is not on track to achieve the Smokefree Aotearoa 2025 goal, particularly for Māori and Pacific peoples, with much more action needed.

“The findings provide strong evidence that legislation introducing plain packs and enhanced warning labels achieved exactly what it set out to do.

“But much more is needed to get to a Smokefree Aotearoa. This is a clear signal that a comprehensive strategy to make smoked tobacco products less appealing, addictive, and accessible must be developed and implemented.”

He also noted recent evidence from the UK that plain packaging could have other benefits such as reducing sales of tobacco products and prompting smokers to switch to less harmful vaping products.

The New Zealand study, carried out in collaboration with the ITC Project team led by the University of Waterloo in Canada, adds to similar evidence from other ITC Project countries such as the UK and Australia where positive impacts of plain packaging have been noted, Professor Edwards says.

“The findings provide important new evidence for other countries considering introducing plain packs and illustrates the importance of robust evaluations being carried out when new smoke-free laws and policies are implemented.”