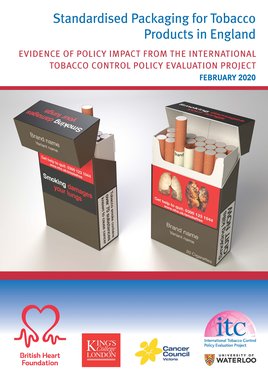 The findings are published today in a new British Heart Foundation-funded report released by the International Tobacco Control (ITC) Policy Evaluation Project, which summarises research findings from King’s College London and the University of Waterloo.

On 20 May 2016, tobacco manufacturers were banned from using attractive packaging to promote tobacco products, and retailers were given one year to comply with the law. Besides standardising the colour, size, and structure of all packages of cigarettes and rolling tobacco, the law also increased the size of the photographic health warnings from 53% of the back of the pack to 65% of both the front and back of the pack.

The ITC Project surveyed over 4,000 adult smokers in England in 2016 and 2018 — approximately one year before and after the law was fully implemented. Findings showed that after the new packs were introduced, there was more than a threefold increase in the percentage of smokers who did not like the look of their cigarette pack, from 16% to 53%.

After the law was implemented, smokers were twice as likely to report that they noticed health warnings before the branding (from 24% in 2016 to 52% in 2018). The percentage of smokers reporting that they supported the law also increased from 32% in 2016 to 44% in 2018.

The study adds to ITC Project evidence from other countries with similar laws such as Australia and emerging evidence from New Zealand showing the benefits of plain packaging as part of an overall strategy to reduce tobacco use. Effective this month, Canada also requires cigarettes to be sold in standardised packs as the country implements one of the toughest packaging laws in the world.

Dr. Geoffrey Fong, Principal Investigator of the ITC Project in Waterloo noted that: ‘Standardised packaging laws shut down one of the last remaining forms of advertising available to the tobacco industry and is a key strategy recommended by the World Health Organization to protect smokers from misleading packaging. The findings should encourage more countries to strengthen their packaging laws.’

Dr. Sara Hitchman, Lecturer of Addictions who led the work at King’s College London stated: ‘The government’s changes to packaging have resulted in smokers being more likely to notice the health warnings on cigarette packs and dislike their packs. We believe these changes will deter smokers from this deadly behaviour.’

Maeva May, Head of Policy at the British Heart Foundation, said: ‘These findings vindicate the decision to adopt standardised packaging in the UK, as it has clearly had an impact on the attitudes of smokers. The UK Government has signalled that the prevention of ill health is a significant priority and has pledged to achieve a smoke-free England by 2030. It’s clear that regulation is an important part of

helping to shift attitudes and tackle smoking rates, and we now need to see further bold action, including a polluter pays levy on the tobacco industry, to make this ambition a reality.’

Deborah Arnott, Chief Executive of Action on Smoking and Health (ASH), said: ‘The evidence from the ITC survey is clear, packaging changes have been successful in making cigarette packs less attractive and health warnings more visible to smokers. But more than one in seven of the adult population still smokes and even stricter regulation is needed if the Government ambition to be smokefree by 2030 is to be achieved. Regulation needs to go further, it’s time to put health warnings on the cigarette sticks as well and make cigarettes as unappealing as the packs they’re sold in.’

Dr. Fong will present the study findings at a conference of tobacco researchers and policymakers in Berlin on February 20, 2020.

Smoking remains the leading cause of preventable death in the United Kingdom, accounting for over 77,000 deaths an estimated £2.5 billion in health care costs each year in England alone.