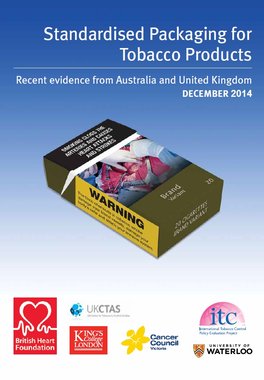 This report is a summary of the recent evidence on the effectiveness of standardised packaging as a tobacco control strategy. The evidence includes new data from the Australia and United Kingdom International Tobacco Control Policy Evaluation Projects (the ITC Project).

Smokers are almost twice as likely to take notice of health warnings on tobacco products when their packaging is stripped of advertising, according to a new report by the British Heart Foundation (BHF). (1)

The BHF’s Standardised Packaging for Tobacco Products report reviewed data from almost 3,000 smokers and ex-smokers to test how effective standardised packaging is as a tobacco control strategy.

The research showed that after tobacco packets were stripped of branding in Australia in December 2012, the number of people taking notice of the warning labels almost doubled.

Tobacco products were also found to be significantly less appealing, with more than four in five (82%) Australians saying they did not like the look of tobacco products.

The BHF is urging the UK Government to take immediate action to ensure standardised packaging is introduced before the general election.

“Standardised packaging is an effective and important public health measure which is already having a significant impact in Australia.

“There can be no more delay and the UK Government must act now to make sure standardised packaging is law before the election.”