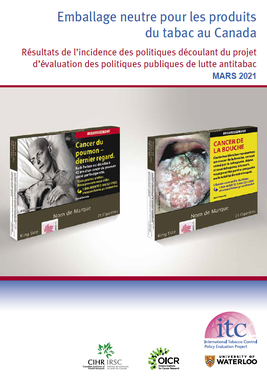 Impact of Plain Packaging in Canada

Tobacco plain packaging regulations were implemented at the retail level in Canada in February 2020 as one of a comprehensive suite of policies to help reach the target of less than 5% tobacco use by 2025 under Canada’s Tobacco Strategy.

This report presents findings on the impact of plain packaging in Canada based on data collected from 4600 adult smokers before (2018) and after (2020) the introduction of plain packaging at the retail level. Data from Canada are also presented in context with data from up to 25 other ITC Project countries — including Australia, England, France, and New Zealand, where plain packaging has also been implemented.

Key findings of the report:

Smokers’ support for plain packaging increased after its implementation

This report is also available in English