Home » Findings » Reports » The trend in affordability of tobacco products in Bangladesh 2009-2015: Evidence from ITC Bangladesh... 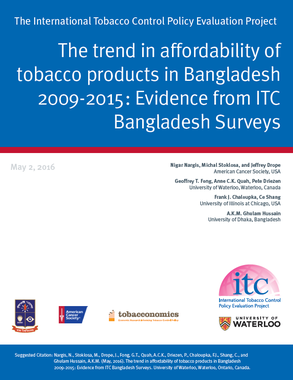 The trend in affordability of tobacco products in Bangladesh 2009-2015: Evidence from ITC Bangladesh Surveys | May 2016 | English

(Monday, 2 May 2016, Waterloo, Ontario, Canada): A report released today entitled “The trend in affordability of tobacco products in Bangladesh 2009-2015: Evidence from ITC Bangladesh Surveys” found that although the price of cigarettes and smokeless tobacco increased between 2009 and 2015, rapid economic growth in Bangladesh more than offset these increases. As a result of weaknesses in Bangladesh’s price and taxation system, which fails to factor in rising incomes, tobacco products including cigarette, bidi and smokeless tobacco (zarda, gul) remain highly affordable. It not only encourages higher tobacco consumption, but is likely to induce tobacco users to shift from bidis (inexpensive hand-rolled cigarettes used particularly by low-income people) and smokeless tobacco to cigarettes rather than quitting tobacco use, given the greater affordability gain for cigarettes relative to bidi and smokeless tobacco products observed in the recent past. The Report, prepared by the International Tobacco Control Policy Evaluation Project (the ITC Project) at the University of Waterloo, in Canada, urges policymakers to change the tax system to keep pace with inflation and rising incomes, and to close the gap between prices of various tobacco products.   A simplified tax system would remove the incentive of switching down to cheaper products and encourage smokers to quit.

The findings showing evidence of an increase in affordability of tobacco products and recommendations for tobacco tax reform are timely for the Government of Bangladesh as a new budget will be announced in the first week of June and implemented from 1 July 2016.

The evidence presented in the report is based on findings from the International Tobacco Control Policy Evaluation Project (ITC Project), the first-ever international cohort study to evaluate the psychosocial and behavioural effects of tobacco control policies and the only research project that focuses on measuring the impact of key policies of the WHO Framework Convention on Tobacco Control (FCTC), which has been ratified by 180 countries including Bangladesh. The ITC Project has conducted surveys of tobacco users and non-users in Bangladesh and 27 other countries beginning in 2002. Further information on the ITC Bangladesh Survey is available at http://www.itcproject.org/countries/bangladesh.