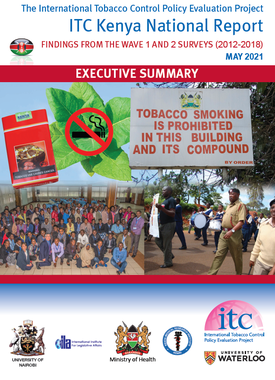 This report describes the findings of ITC Kenya Surveys conducted in 2012 (Wave 1) and 2018 (Wave 2) among approximately 1,500 tobacco users and 600 non-tobacco users. As a Party to the FCTC since 2004, Kenya is obligated to implement strong national policies to reduce tobacco use, including large pictorial health warnings, bans on smoking in public places, bans on tobacco advertising, promotion, and sponsorship, and increases in tobacco taxes and prices.

Kenya is making progress towards combatting smoking through strong tobacco control policies such as picture-based health warnings, but there remain significant challenges, according to the ITC Kenya National Report that was released by the Kenya Ministry of Health on May 31, 2021 — World No Tobacco Day.

The report identifies the need for the Government of Kenya to strengthen their tobacco control efforts in several areas:

the harms of tobacco products and decrease the social acceptability of tobacco use.

2. Introduce a ban on menthol cigarettes to help reduce tobacco consumption and

3. Enhance access to cessation services to support tobacco users who want to quit,

including increased training of physicians and health care providers.

4. Increase the impact of the current health warnings by implementing the full set of all

15 rotating PHWs on both smoked and smokeless tobacco packages, and increasing the

size of health warnings to at least 50% of both sides of the pack.

5. Consider moving forward with plain packaging legislation along with larger PHWs as

reduce the appeal of tobacco, which has been successfully implemented in Australia and

6. Strengthen the current smoke-free law by making all public places and workplaces

100% smoke-free without exceptions, accompanied by a rigorous enforcement effort to

7. Strengthen enforcement of the ban on TAPS to decrease exposure to tobacco

marketing in the entertainment media and in retail environments even further.

8. Simplify the tobacco tax structure by applying a uniform specific tax rate so that all

tobacco products are taxed equally to discourage switching between brands or products,

in order to make tobacco products less affordable over time.

9. Strengthen enforcement of the ban on the sale of cigarettes by single sticks.