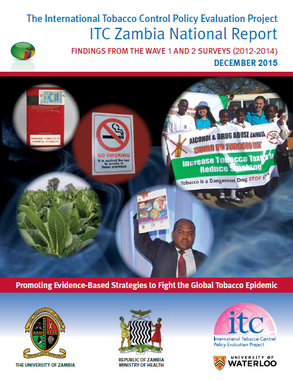 The ITC Zambia Survey is a face-to-face survey of a nationally representative cohort sample of approximately 1,500 tobacco users and 600 non-users. The Wave 1 Survey was conducted between September 7, 2012 and December 20, 2012. Wave 2 was conducted approximately two years later (August 18, 2014 – October 30, 2014). This report presents the results from the most recent wave (Wave 2) of the ITC Zambia Survey and compares progress on tobacco control in Zambia against other ITC countries.

This report presents findings of the Wave 1 (2012) and Wave 2 (2014) Zambia Surveys. Key findings show that Zambia has made little progress towards meeting its obligations to the FCTC.

Zambia lags far behind other countries in implementing effective policies to protect the public from the growing threat of a tobacco epidemic despite strong public support, and Zambia’s continued inaction is promoted by incorrect beliefs that tobacco leaf growing is an economic boon to Zambian farmers according to two reports released today in Lusaka, Zambia by an international research team at the University of Zambia, the University of Waterloo in Canada, and the American Cancer Society.

Zambia is a Party to the World Health Organization (WHO) Framework Convention on Tobacco Control (FCTC), a global health treaty that has been ratified by 180 countries. As a Party to the FCTC since 2008, Zambia is obligated to implement comprehensive tobacco control laws to control the threat of a tobacco epidemic, including large pictorial health warnings, bans on smoking in public places and tobacco advertising, and increases in tobacco taxes and prices.

The first report presents the findings of the International Tobacco Control Policy Evaluation Project (the ITC Project) in Zambia. Approximately 1,500 tobacco users and 600 non-users were surveyed in 2012 and recontacted in 2014 to identify strengths and weaknesses in Zambia’s efforts to protect the public from the harms of tobacco.

The ITC Zambia report released today is the second Zambia report in two years by the research team. Findings show that over the past two years, Zambia has made little progress towards meeting its FCTC obligations and addressing the policy shortcomings that were identified in the first report.

The ITC Project, centered at the University of Waterloo in Canada, has since 2002 conducted large-scale studies to assess the impact of FCTC policies. In all, ITC impact assessment studies have been conducted in 23 countries, covering over half of the world’s population and over two-thirds of the world’s tobacco users.

Health warnings are a proven no-cost measure to increase tobacco users’ awareness of the risks associated with smoking. Large, pictorial warnings are most effective in motivating smokers to quit, discouraging non-smokers from starting, and keeping ex-smokers from starting again. Seven years have passed since Zambia ratified the FCTC and the government has failed to introduce large pictorial warnings. And so Zambia continues to have just one single text warning in English on the front and back of the pack with no minimum size specified.

The ITC Zambia Survey shows alarming evidence of the weak impact of its single text warning. 40% of Zambian smokers were unable to read the health warning at all and 14% read it with difficulty. Zambia ranked the lowest (22%) of 11 low- and middle-income ITC countries on the percentage of male smokers and quitters who noticed the warnings.

The lack of action on health warnings contrasts with smokers’ own desire for stronger health warnings. In fact, over three-quarters (77%) of smokers in Zambia want more health information on cigarette packs—the highest percentage of 20 ITC countries.

Taxation is another area where Zambia has shown little progress. The World Health Organization concludes that increasing tobacco taxes is the single most effective strategy for reducing tobacco use. But the ITC report shows that cigarettes continue to be highly affordable in Zambia, and as a result, unlike other countries where prices are high enough to motivate quitting, in Zambia cigarette prices are too low to motivate smokers to quit. Among 20 ITC countries, Zambia has one of the lowest rates (27%) of male smokers and quitters who report that price led them to think about quitting. In addition, the easy availability of hand-rolled cigarettes, which are taxed at a lower rate, and of single cigarettes, which allow the poor and youth to obtain cigarettes contribute to missed opportunities by Zambia to use strong price/tax policies to reduce tobacco use.

And yet even smokers in Zambia support tax increases on tobacco, and the support is growing from 56% of smokers in 2012 to 74% in 2014. About three-quarters (73%) of smokers supported a tax increase on hand-rolled tobacco in 2014.

Professor Geoffrey T. Fong of the University of Waterloo in Canada, Chief Principal Investigator of the ITC Project said: “The ITC Survey findings clearly show that Zambia needs to move forward urgently on many different tobacco control policy fronts. This is a timebomb that is ticking away, and over the years, if the growing tobacco epidemic is not effectively countered through stronger policies, Zambia and other countries are certain to experience an unprecedented health and economic crisis.”

The second report from the American Cancer Society provides evidence countering tobacco industry claims that tobacco farming is an economic benefit for farmers. The report is based on an extensive survey of 497 small-scale tobacco farmers across the three largest tobacco-growing provinces in Zambia.

However, these perceptions of profit are an illusion because they do not take into account the costs of labour, which are substantial, requiring 1,200 to 1,500 hours of labour to produce just one acre, with the most intensive tasks such as harvesting adding to the total hours required.

In other words, both contract and independent small-scale tobacco farmers in Zambia operate at a net loss.

But then why do farmers continue to grow tobacco? The survey identified several reasons. Contract farmers, who make up nearly three-quarters of small-scale tobacco farmers are attracted by the fact that they have a buyer for tobacco leaf, they have access to credit through their contract, and perhaps most importantly, many contracts provide for cash payments up-front, which is very attractive for farmers who for other crops would need to pay up-front for their inputs and would need to wait many months for an uncertain return on their investment.

This combination of cash up-front and certainty in having a buyer for their crops, compels many farmers to enter and to continue farming tobacco.

However, the contracts plunge these farmers into an increasing and deepening cycle of debt because the cash payments plus their revenue at harvest are not sufficient: they must grow tobacco again to pay back the leaf-buying companies. Their contracts keep them at subsistence levels from year to year while their total debt increases year after year.

“The tobacco industry promotes a narrative that growing tobacco leaf provides a good living for many thousands of farmers in Zambia. The results of our research clearly show that the opposite is really true: the vast majority of small-scale tobacco farmers have very bleak economic livelihoods, and many are firmly stuck in vicious and increasing cycles of debt,” said Dr. Jeffrey Drope, Vice President of Economic and Health Policy Research at the American Cancer Society, the lead investigator of the farming survey.

These two reports demonstrate the need for stronger tobacco control measures in Zambia. The evidence of poor policy performance, yet strong support among tobacco users for stronger policies are a call to action for the Zambian government to accelerate implementation of the FCTC. Africa has become the focus for tobacco company marketing efforts as rates of smoking have declined in developed countries. It is estimated that smoking prevalence in Africa will increase from 15.8% in 2010 to 21.9% by 2030 if no further policy action is taken. However, if countries in Africa implement the FCTC at the highest levels, it is estimated that there could be a decrease in smoking to 11.3% by 2030.

“It is clear that a multisectoral approach must be used in combating the growing threat of tobacco in Africa. It is only through a mobilization and coordination of efforts by the Ministries of Health, Commerce, Finance, Agriculture, as well as other ministries, and with contributions by Civil Society, that countries in Africa can effectively combat the tobacco epidemic that threatens their health and economic livelihood,” said Professor Fong.