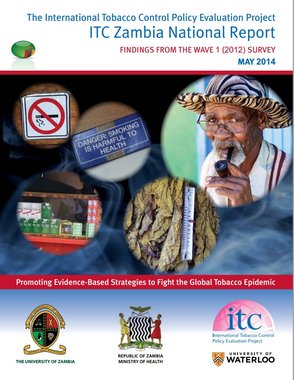 The ITC Zambia Wave 1 Survey findings presented in this report provide evidence of the impact of these tobacco control policies on tobacco users in Zambia and identify strengths and weaknesses in the implementation of the FCTC.

* Comparatively low levels of awareness of link between smoking and lung cancer, heart disease and stroke together with affordability of tobacco products could create health and economic problems*

(Friday, 30 May 2014, Waterloo, Ontario, Canada and Lusaka, Zambia):  A report released today at a World No Tobacco Day event in Lusaka, Zambia, reveals that Zambia needs to address key gaps in its tobacco control policies in order to combat the increasing tobacco epidemic in Africa.  The report, entitled “ITC Zambia National Report: Findings from the Wave 1 (2012) Survey” was produced by the International Tobacco Control Policy Evaluation Project (the ITC Project), centered at the University of Waterloo, in partnership with the University of Zambia and the Zambian Ministry of Health.

The Report finds that while Zambia has demonstrated its commitment toward tobacco control by implementing the Public Health (Tobacco) Regulations law in 1992 and by ratifying the World Health Organization (WHO) Framework Convention on Tobacco Control (FCTC) in 2008, there are gaps in the country’s tobacco control policies, such as:

-       there are no large graphic health warnings on tobacco packaging

-       there is a lack of effective public health education campaigns to warn people about the real health and economic harms of tobacco use; meanwhile, the tobacco industry still is free to advertise its products to consumers.

The need for evidence on the status of tobacco control in African countries has become more urgent. The population of Africa is expected to increase rapidly from 12% to 30% of the global population and the tobacco industry is seeking to target both population and economic growth across Africa in order to increase sales and profits. Without strong action on tobacco control, the prevalence of tobacco use in the African region is expected to increase substantially. One recent estimate is that tobacco use in Africa will increase by close to 40% (from 15.8% to 21.9%) between 2010 and 2030, when almost all other regions of the world will experience decreases in tobacco use.

Dr. Joseph Kasonde, Honorable Minister of Health, Zambia, commented: “We are aware that strong implementation of tobacco control policies now can curb future dramatic increases in smoking prevalence. It is important for us to carefully consider the recommendations in this report and move forward quickly in implementing strong packaging and labelling measures within a comprehensive tobacco control strategy.”

Dr. Fastone Goma, President of the Heart and Stroke Foundation, Zambia, and Principal Investigator for the ITC Zambia Survey, said: “Urgent action is needed as Zambia and other low- and middle income countries (LMICs) are increasingly being targeted by the tobacco industry and tobacco use continues to grow. This report finds that while Zambia has enacted tobacco control laws, these laws need to be strengthened and enforced.  For example, although comprehensive smoke-free policies have been established, evidence of weak levels of enforcement mean that Zambians are being exposed to secondhand smoke and therefore are at increased risk of cardiovascular disease and other chronic diseases. The Heart and Stroke Foundation, together with our partners, is eager to move forward to help translate the findings in this report into training, program, and policy initiatives.”

In 2007, a Demographic and Health Survey (DHS) conducted by the Ministry of Health and Central Statistical Office among males and females aged 15-49 years found smoked tobacco prevalence rates of 23.8% among males and 0.7% among females.  A national-level WHO Global Youth Tobacco Survey among 13-15 year olds found that a quarter (25.6%) of students currently use any form of tobacco (24.9% of boys and 25.8% of girls).

Professor Geoffrey T. Fong of the University of Waterloo in Canada, Chief Principal Investigator of the ITC Project, the international research collaboration that is evaluating the impact of the Framework Convention on Tobacco Control policies in 22 countries, said: “The risks to youth highlighted in this report cannot be ignored.  A comparatively high level of youth smoking is being sustained by low tobacco taxes and the availability of single cigarettes for purchase, which increases affordability. The tobacco industry remains free to market to youth by advertising at point of sale and on entertainment channels.  Menthol cigarettes encourage youth initiation of smoking by making cigarettes feel less harsh.  All these things are creating a new generation of tobacco addicts.  This will create a health and economic time bomb for Zambia, unless current gaps in tobacco control can be closed.  We are honoured to have collaborated with Zambia’s Health Ministry and The University of Zambia in this project and hope it will help to inform future policy decisions.”

The ITC Zambia Survey - the first-ever national study of tobacco use and of the impact of tobacco control policies in Zambia - surveyed a nationally representative random sample of 1,483 tobacco users and 595 non-users aged 15 years and older.  The main findings of the Survey include:

Misleading labels lead to erroneous beliefs regarding risk: Misleading descriptors such as “light”, “mild”, or “low tar” on tobacco packages are commonplace. As a result, about half of all smokers (51%) thought that light cigarettes are less harmful than regular cigarettes, despite scientific evidence showing that “light” and “mild” brands are not any less harmful than regular brands.

Current health warnings are not effective: The regulations for health warnings lack much-needed detail. As a result, there is wide variation in the size, location, and format of the single text-only warning and this has led to very low levels of effectiveness of the health warning in Zambia. Only one-quarter (24%) of smokers reported even noticing the single text-only health warning on cigarette packs. Among 10 low- and middle-income countries (LMICs) surveyed in the ITC Project, Zambia had the lowest percentage (28%) of male smokers who noticed the warning “often” or “very often”.  Only 14% of smokers “often” or “regularly” read the labels in the last month. The current text warning is printed only in English and could not be read by 21% of smokers who showed survey interviewers their cigarette packs; a 2010 census found that only 1.7% of the population of Zambia use English as their primary language.

Tobacco Price and Taxation: Zambia’s tobacco tax rates are one of the lowest in the African region. The ITC Zambia Survey found that cigarettes are highly affordable in Zambia and that prices are too low to motivate smokers to quit. In addition, Zambia has not banned the sale of single cigarettes in Ntembas (kiosks). Almost half (47%) of smokers and mixed tobacco users stated that their last purchase of cigarette was mainly single cigarettes. The availability of undertaxed products, such as single cigarettes, increases youth access to affordable tobacco products. More than half (56%) of smokers thought that the government should increase taxes on cigarettes and a third (34%) of smokeless users thought that the government should increase taxes on smokeless tobacco products to encourage quitting.

Zambian smokers recognize that smoking is harmful, but need help to act upon that recognition The majority (88%) of smokers recognize that smoking is not good for your health, comparable to similar surveys in Mauritius, India, and Bangladesh. More than 90% of Zambian smokers “agreed” or “strongly agreed” that cigarettes are addictive and 87% of smokeless users agreed that smokeless tobacco is addictive.  More than two-thirds (68%) of smokers in Zambia regret taking up smoking and more than one-third (43%) have tried to quit.  A third (34%) of smokers who had visited a health care provider in the last six months were given advice to quit smoking – a good starting point, but lower than in LMICs such as Mauritius and India where about half of smokers received advice to quit.

Tobacco Industry Advertising, Promotion, and Sponsorship: Under Zambia’s implementation of the FCTC, a ban on all forms of advertising should have been implemented in 2013. However, the advertising of tobacco products is still permitted through newspapers, radio, television, cinemas, billboards, posters, magazines, and videos.  The ITC Zambia Survey found that tobacco advertising was highest in the entertainment media. These findings are of concern as point of sale advertising and advertising through the depiction of smoking in the entertainment media are strongly associated with initiation of youth smoking.

The report recommends the following strategies to strengthen tobacco control in Zambia:

1.     Increase the price and taxation of tobacco products and ban the sale of single cigarettes.

2.     Design and implement pictorial health warnings that occupy at least 50% of the top part of the front and back of the pack - in the country’s principal language - as called for in Article 11 of FCTC.

3.     Strengthen the smoke-free law by ensuring strong and consistent enforcement, particularly in bars and indoor workplaces, including strong penalties for violations.

4.     Implement a comprehensive ban on tobacco advertising, promotion, and sponsorship of tobacco products, including the entertainment media, with no exceptions.

5.     Design and implement health information and mass media campaigns to further educate the public regarding the harms of tobacco and to keep messages salient.

6.     Increase resources to assist tobacco farmers who are considering switching from tobacco farming to farming other crops or alternative livelihoods.

7.     Increase government support for cessation services and training of health care workers to strengthen their role in cessation.

8.     Ban misleading, false, or deceptive packaging and labelling, including descriptors such as “light”, “mild”, or “low tar”, as well as the display of quantitative or qualitative statements about tobacco constituents and emissions that might imply that one brand is less harmful than another. Consider plain packaging to reduce the appeal of tobacco products.