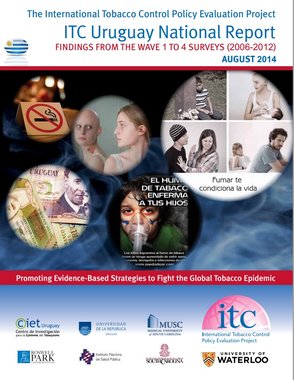 This report has also been translated in Spanish.

* Over 90 percent of smokers now support smoking bans in restaurants and workplaces,
up from 54 percent in 2006 *

The ITC Uruguay National Report (the Report) found that the country’s world-leading, comprehensive tobacco control strategy has had positive effects on raising awareness of the true harms of smoking, reducing misperceptions about “light/mild” cigarettes, reducing exposure to secondhand smoke, and encouraging quit attempts.  However, more needs to be done to reduce the demand for tobacco products through tax increases, as the affordability of cigarettes has increased by more than 2 percent per annum, on average, between 2006 and 2012. Increased awareness of the harms of smoking has helped to increase support for tobacco control and smoke-free policies, with 68 percent of smokers in 2012 saying they believe the government should take even stronger action to protect the public from the harms of smoking, compared with less than half of smokers in 2006. The percentage of smokers not planning to quit decreased from 40 percent in 2006 to 31 percent in 2012 and there was an increase in the number of smokers who had made a quit attempt in 2012 (44 percent), compared with 2010-2011 (39 percent). Three quarters of the smokers surveyed in 2012 would support a total ban on tobacco products within 10 years, if government assistance was provided to help smokers quit.

The findings are based upon four waves of the ITC Uruguay Survey (the Survey), conducted between 2006 and the end of 2012.  The Survey polled representative samples of smokers in Montevideo, the capital city, and (since 2008) in an additional four cities throughout the country—Durazno, Maldonado, Rivera, and Salto.  During this period, Uruguay implemented several important tobacco control policies in line with the WHO Framework Convention on Tobacco Control (FCTC), the first-ever global health treaty, which the country ratified in 2004. These policies were: a comprehensive ban on indoor smoking in public places, a ban on tobacco advertising and promotion, and several tobacco tax increases.  In addition, Uruguay’s Government increased the size of pictorial warning labels from 50 percent to 80 percent of the front and back of cigarette packs, implemented highly graphic warnings on the health effects of smoking, and introduced a ban on multiple brand presentations.  In between the third and fourth waves of the Survey, the government introduced a new round of images to warn smokers of the dangers of tobacco. By comparing data from each wave of the Survey in the context of policy changes during the preceding period, researchers were able to measure the impact of those policies on key attitudes and behaviors.

Uruguay introduced graphic health warnings in 2006, but in 2009-10 (in between Waves 2 and 3 of the Survey) the health warnings were enhanced with stronger graphic images and in size, increasing to 80 percent of the front and back of the pack, becoming the largest in the world. This enhancement led to significant increases in several indicators of warning effectiveness included in the ITC Uruguay Survey. Smokers were significantly more likely to report that the warnings made them think about the health risks of smoking “somewhat” or “a lot” (increasing from 35 percent in 2006 to 44 percent in 2012). When asked how the warning labels on cigarettes made them feel, over three-quarters (78 percent) of smokers who noticed warning labels reported that the health warnings made them feel “somewhat” or “very unpleasant”, and approximately half reported that the warning labels made them feel “somewhat” or “very alarmed” (50 percent at Wave 3; 56 percent at Wave 4). Nearly a third (31 percent) of smokers think that there should be more information on cigarette packs and 44 percent “agreed” or “strongly agreed” that cigarettes should be sold in plain packaging.

This study also confirms that graphic health warnings can have a dramatic impact on the public’s knowledge about the specific harms of tobacco.  In between Waves 3 and 4 of the Survey, a new warning label highlighted the link between smoking and the risk of stroke.  As a consequence, the percentage of smokers who were aware of the link between smoking and stroke increased from 44 percent in 2006 to 71 percent in 2012.

Branding and perceptions of harm

The report notes that tobacco manufacturers have sought to circumvent the differentiated branding law by introducing and marketing new brands. The vast majority (91 percent) of smokers agreed that “Although the words “light” or “mild” or “smooth” can no longer be used, the same cigarettes are being sold under different names in Uruguay.”  This may explain why some smokers still think their brand is more or less harmful than other brands. While the majority of smokers (74 percent) said that their brand was “no different” compared to other cigarette brands, 29 percent said that they were smoking a “light”, “mild” or “low tar” brand.  One-fifth (19 percent) believed their brand was “a little less harmful” compared to other brands, while 7 percent reported that the brand they usually smoke was “a little more harmful.”

The Report shows that support for smokefree laws remains high over time.  When the indoor smoking ban was introduced, only 54 percent of smokers thought that smoking should not be allowed at all in indoor workplaces. In 2012, 92 percent “agreed” or “strongly agreed” with the policy. There also has been a significant increase in the number of smokefree homes, with 37 percent of smokers saying that they do not allow smoking within the home, compared with only 21 percent of smokers in 2006. In 2012, a significant majority (88 percent) of smokers “agreed” or “strongly agreed” that smoking should be banned in cars when children are present; 84 percent of smokers say they currently do not permit smoking in a car when there are children present – offering policymakers another potential route to further reduce tobacco use.

In her preface to the report, Dr Susana Muniz, Uruguay’s Minister of Health, says:  "As Uruguay continues to fight tobacco industry challenges to our government’s strong actions on tobacco control, this report prepared by CIET and the ITC Project at the University of Waterloo provides evidence that our actions are effective, but also that we need to go even further. A growing percentage of smokers in Uruguay support our strong stance on tobacco control and are in favor of even stronger measures. Uruguay’s large pictorial warnings have increased smokers’ knowledge of smoking-related health effects and thoughts about quitting. Our comprehensive tobacco control policies have resulted in a substantial, unprecedented decrease in tobacco use. We are prepared to continue to be at the forefront of tobacco control in the region and globally to reduce the burden of tobacco-related diseases in Uruguay and in other countries."

Dr Eduardo Bianco, a cardiologist and President of the Tobacco Epidemic Research Center of Uruguay (CIET), commented: “We are delighted that the ITC Uruguay National Report confirms that our country’s strong stance on tobacco control is working. There has been a significant decrease in smoking prevalence in Uruguay between 2006 and 2011, with a decline in male smoking prevalence from 39 percent to 29.7 percent and female smoking prevalence from 28 percent to 19 percent. The Survey also notes a real increase in the number of smokers who have attempted to quit, but we can do more to encourage cessation.  The absence of tax increases since 2010, while Uruguayans have benefitted from rising incomes, has only made cigarettes more affordable. Additional tax increases would be an easy way of reducing demand for cigarettes, encouraging smokers to quit and deterring youth from initiating smoking.  Interestingly, the Report notes a significant increase in the percentage of smokers who believe that tobacco companies are unethical, from 40-45 percent before the PMI litigation was announced to 59 percent in 2012. The survey does not specifically ask whether there is a correlation between the two, but it would not be surprising if that was the case. Uruguayans recognize Uruguay’s fundamental duty to do all it can to protect its citizens from the harms of tobacco, even if Big Tobacco does not.”

Professor Geoffrey T. Fong of the University of Waterloo in Canada, Chief Principal Investigator of the ITC Project, the international research collaboration that is evaluating the impact of Framework Convention on Tobacco Control policies in 22 countries, said: “The ITC Uruguay Project confirms our findings in other ITC Project countries that large graphic warning labels make the warnings more noticeable and increase thoughts about the harms of smoking and about quitting. In fact, the percentage of smokers in Uruguay who reported that the health warnings made them think “a lot” about the health risks of smoking was relatively high compared with other ITC Project countries – ranking fourth highest among males and second highest among females. This report also confirms that support for comprehensive smoking bans held firm and even increased slightly between Wave 3 and Wave 4 of the Survey. The overall growth in support for Uruguay’s smoke-free laws after their implementation is consistent with ITC Project results in Ireland, Scotland, the rest of the United Kingdom, and France – but interestingly the percentage of smokers in Uruguay who believe that smoking should not be allowed at all in workplaces is the highest of all ITC countries (88 percent of men and 91 percent of women). For Uruguay to make further progress in the fight against tobacco, we recommend that the government increases taxes on tobacco products, invests in national mass-media campaigns to increase awareness of the harms of tobacco and encourage cessation, legislates against the continued depiction of smoking in the media and considers legislation to introduce plain packaging.  Uruguay has been a world leader in tobacco control – we look forward to reporting on its further progress after the next Wave of the ITC Uruguay Survey.”

While launching Uruguay’s Knowledge Hub for FCTC Implementation earlier this year, the Chancellor of Uruguay, Dr. Luis Almagro said: “Anti-tobacco measures are essential, are fundamental to the sovereignty of the government. Therefore they are inalienable and unmodifiable and it is appropriate to go further, because they are part of the population’s rights - the fundamental right, the right to life, the right to health, and other social rights.”