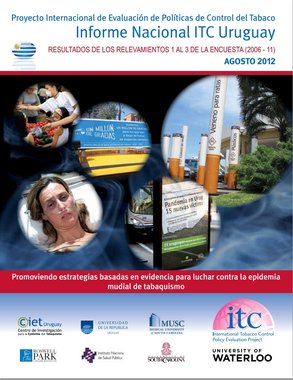 This report presents results of Waves 1 to 3 (2006 – 2011) of the ITC Uruguay Survey – The key findings contained in this report provide evidence regarding attitudes and behaviours of adult smokers to assist policymakers in implementing effective tobacco control policies in Uruguay.

(Thursday August 2nd, 2012, Montevideo, Uruguay and Waterloo, Ontario, Canada): The International Tobacco Control Policy Evaluation Project (the ITC Project) today launched a new report on the effectiveness of tobacco control policies in Uruguay. The ITC Uruguay Survey (the Survey) found that the country's world-leading, comprehensive tobacco control strategy has had positive effects on raising awareness of the true harms of smoking, reducing misperceptions about "light/mild" cigarettes, reducing exposure to secondhand smoke, and reducing the demand for tobacco products through tax increases. The strategy has been accompanied by increased support for tobacco control and smoke-free policies, with two-thirds of smokers in 2011 supporting even stronger government action to protect the public from the harms of smoking, up from about half of smokers in 2006.

The findings are based upon three waves of the ITC Uruguay Survey, conducted between 2006 and 2011.  The Survey polled representative samples of smokers in Montevideo, the capital city, and (since 2008) in an additional four cities throughout the country-Durazno, Maldonado, Rivera, and Salto.  During this period, Uruguay implemented several important tobacco control policies in line with the WHO Framework Convention on Tobacco Control (FCTC), the first-ever health treaty, which the country ratified in 2004. These policies were: a comprehensive ban on indoor smoking in public places, a ban on tobacco advertising and promotion, and several tobacco tax increases.  In addition, Uruguay's Government increased the size of pictorial warning labels from 50% to 80% of the front and back of cigarette packs, implemented highly graphic warnings on the health effects of smoking, and introduced a ban on multiple brand presentations.  By comparing data from each wave of the Survey in the context of policy changes during the preceding period, researchers were able to measure the impact of those policies on key attitudes and behaviors.

Uruguay introduced graphic health warnings in 2006, but in 2009-10 (in between Waves 2 and 3 of the Survey) the health warnings were enhanced with stronger graphic images and in size, increasing to 80% of the front and back of the pack, becoming the largest in the world. This enhancement led to significant increases in several indicators of warning effectiveness included in the ITC Uruguay Survey. Smokers were significantly more likely to report noticing the warnings often or very often (from 65.1% at Wave 2 before the enhanced warnings to 70.9% at Wave 3, after the enhanced warnings were introduced); they were also more likely to report that the warnings made them think about the health risks of smoking (increasing from 33.1% to 43.1%), and more likely to report that the warnings made them more likely to think about quitting (from 15.6% to 30.3%). In addition, although concern about personal health was consistently the most common reason for quitting among smokers (79% at Wave 3), the number of smokers citing "Warning labels on cigarette packs" increased from 21.6% at Wave 2 to 32.4% at Wave 3. This represented the largest increase between Waves of the Survey and coincided with the introduction of the larger warning labels.

Dr Eduardo Bianco, a cardiologist and President of the Tobacco Epidemic Research Center of Uruguay (CIET), commented: "Our government has taken a lead in Latin America, and indeed the world, by being the first to introduce such a comprehensive package of tobacco control policies.  We are delighted that this study proves that these policies are working.  However, these data also underline that we have further to go to protect smokers and non-smokers in Uruguay.  Increasing taxes on tobacco products is considered to be one of the most effective components of a comprehensive tobacco control strategy, particularly in dissuading youth from starting to smoke.  Despite several increases in tobacco tax during the Survey period, still there is room for additional taxation to reduce demand for cigarettes and encourage smokers to quit.  In addition, only half of smokers who visited a doctor in the previous year reported receiving advice to quit from a health professional during the visit.  This is a missed opportunity to help improve health outcomes for Uruguayans and suggests that the provision of cessation advice should become standard procedure for health professionals.  Overall, I hope that these data demonstrate the progress that can be achieved in a relatively short timeframe and encourage the adoption of similar national-level legislation in other countries."

Professor Geoffrey T. Fong of the University of Waterloo in Canada, Chief Principal Investigator of the ITC Project, the international research collaboration that is evaluating the impact of Framework Convention on Tobacco Control policies in 23 countries, said: "The ITC Uruguay Project confirms our findings in other ITC Project countries that large graphic warning labels make the warnings more noticeable and increase thoughts about harms of smoking and about quitting. ITC findings have also shown that health warnings are a major source of knowledge about the specific harms of tobacco products, and this is shown clearly in Uruguay. For example, knowledge that secondhand smoke causes lung cancer among non-smokers is higher in Uruguay (91%) than in high-income ITC countries like United Kingdom and Australia (both 80%).  This report also confirms that support for comprehensive smoking bans has increased steadily since the implementation of the 2006 smoke-free regulations in Uruguay (e.g., support for smoke-free workplaces has increased from 54% to 90% of smokers).  This finding of growing support for smoke-free laws after their implementation is consistent with ITC Project results in Ireland, Scotland, the rest of the United Kingdom, and France.  Taken as a whole across all ITC Project countries, our research underlines the effectiveness of the national-level policies of the WHO Framework Convention on Tobacco Control in protecting public health-in Uruguay and in many other countries."

Laurent Huber, Executive Director of the Framework Convention Alliance, an alliance of 350 NGOs from over 100 countries working to promote stronger tobacco control policies, noted that: "This report provides conclusive proof that Uruguay's pioneering tobacco control policies - particularly with regard to large, graphic health warnings and bans on multiple brands - are an effective means of reducing tobacco's appeal.  These policies are having a positive impact on attitudes and behaviour and so are playing a critical role in ensuring that fewer people fall into the trap of sickness and premature death. We call upon Parties of the WHO Framework Convention on Tobacco Control to take note of these results and to examine how they might amend their own tobacco control policies to achieve reductions in tobacco use. Finally, we continue to support Uruguay in its defense of the legal action from Philip Morris International -  based upon this study, we can see why the tobacco industry is so keen to overturn legislation on warning label size and multiple brands."