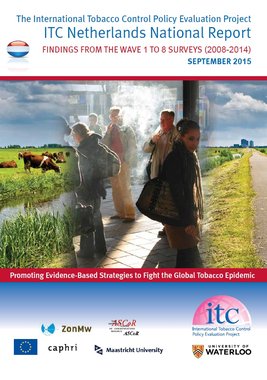 It has been 10 years since the Netherlands adopted the FCTC – the treaty was signed in June 2003 and ratified in January 2005. This report evaluates the effectiveness of the Netherlands’ implementation of the FCTC. Between 2008 and 2014, 7 survey waves of the full cohort (approximately 2,000 youth and adult smokers above the age of 15 years at Wave 1) were conducted in the Netherlands. ITC Netherlands data collected over 6 years has demonstrated that progress has been made in some areas, but the Survey findings make it clear that the Netherlands needs to do more to strengthen tobacco control policies and meet its obligations as a Party to the FCTC. The ITC Netherlands research findings point to several specific opportunities for the Dutch government to address the leading cause of preventable death in the Netherlands as it enters the second decade of FCTC implementation.

WATERLOO, Ont. (12, September 2015) – Dutch smokers, after years of tobacco control policies, are generally unconcerned about the dangers of smoking and second hand smoke, according to an international comparative study published today.

The International Tobacco Control Policy Evaluation Project (ITC Project) led by Professor Geoffrey T. Fong from the University of Waterloo, presented their findings in Maastricht at the European meeting of the Society for Research on Nicotine and Tobacco.

Compared with fifteen other countries studied, the Netherlands has the lowest percentage of smokers reporting that they often think about the harm of smoking to themselves (22%) or to others (9%). Moreover, fewer Dutch smokers than smokers in other countries realize that heart disease, stroke and lung cancer can be caused by smoking or that heart disease in non-smokers can be caused by exposure to second hand smoke.

In 2005 the Netherlands signed the World Health Organisation’s Framework Convention on Tobacco Control—the first-ever health treaty--obligating the country to take measures to reduce smoking. The ITC Project findings reveal that tobacco control policies in the Netherlands are not as effective as policies elsewhere in the world.

“Only 21% of smokers in the Netherlands have negative attitudes toward smoking, which is the second lowest among thirteen countries the ITC Project is studying,” said Professor Fong from Waterloo’s Department of Psychology. “The Dutch have a relatively poor understanding of the dangers of smoking and exposure to second hand smoke, which is disturbing.”

The comparative study by the ITC Project measured a cohort of more than 2,000 Dutch smokers against others from around the world. The project found that smokers around the world had a better perception of the risks associated with smoking.

“We are concerned that the poor understanding of the risk of smoking in the Netherlands is directly connected to a near-absence in education campaigns over the past five years,” said Fong.  “We are calling on the Dutch government to make new and stronger investments in educational campaigns to reduce tobacco use.”