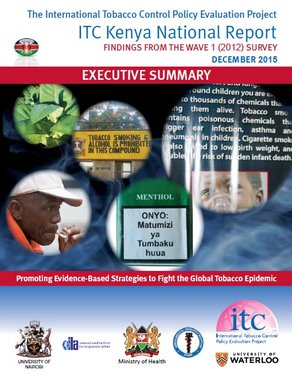 The ITC Kenya Wave 1 (2012) Survey findings provide evidence that the 2007 Tobacco Control Act is effective in some policy areas, such as curbing direct forms of tobacco advertising, promotion, and sponsorship, and providing protection in some public places from the harms of secondhand smoke. However, the implementation of the Act requires strengthening and improved enforcement to address weaknesses across key policy domains of the FCTC, including health warnings, tobacco taxation, and public education.

Kenyan tobacco users want more information on tobacco packages to become better informed about the harms of tobacco use, according to a report released today in Nairobi, Kenya by an international research team at the Kenya Ministry of Health, the Kenya Medical Research Institute, the International Institute for Legislative Affairs, the University of Nairobi, and the University of Waterloo in Canada. The full Press Release is available for download here.

In its efforts to address the growing threat of tobacco, the Government of Kenya signed and ratified the WHO Framework Convention on Tobacco Control (FCTC) in 2004 and passed a comprehensive Tobacco Control Act 2007 to implement the treaty. Then in 2014 the Ministry of Health tabled regulations to strengthen health warnings by requiring that they include graphic images. These regulations are currently under legal challenge by British American Tobacco (BAT) Kenya Limited.

The report presents the findings of the International Tobacco Control Policy Evaluation Project (the ITC Project) in Kenya. Approximately 1,500 tobacco users and 600 non-users were surveyed to identify strengths and gaps in Kenya’s efforts in implementing the FCTC to protect the public from the harms of tobacco.

The FCTC is a global health treaty that has been ratified by 180 countries. As a Party to the FCTC since 2004, Kenya is obligated to implement strong national policies to reduce tobacco use, including large pictorial health warnings, bans on smoking in public places and bans on tobacco advertising, promotion and sponsorship, and increases in tobacco taxes and prices. In addition, Kenya has banned the sale of cigarettes by single sticks as well as putting in place other laws that ensure minors do not access tobacco products.

The ITC Project, centered at the University of Waterloo in Canada, has since 2002 conducted large-scale studies to measure the effectiveness of implementation of FCTC tobacco control policies. In all, ITC studies of FCTC policies have been conducted in 23 countries, covering over half of the world’s population and over two-thirds of the world’s tobacco users.

A central finding of the ITC survey is that smokers in Kenya are less knowledgeable than those in many other countries that smoking leads to many severe health effects, such as heart disease and stroke. Only two-thirds of male smokers were aware that smoking causes heart disease – the second-lowest of 14 countries in the ITC Project, higher only than China. Less than half (47%) of male smokers believed that smoking causes stroke – the second-lowest percentage out of 20 ITC countries, again higher only than China.

The ITC Kenya Survey found that the majority of Kenyan tobacco users want stronger warnings on packs. About two-thirds (63%) of tobacco users and 90% of non-users thought there should be more health information on cigarette packages.

In addition to pictorial health warnings, the 2014 Regulations called for bans on smoking in cars and streets near public places and measures to prevent the tobacco industry from interfering with the implementation of new laws. These regulations were set to come into force on June 5, 2014. However, BAT challenged the regulations in court before they came into force. The hearings in the High Court by Justice Mumbi Ngugi were concluded last week and it is expected that the ruling will be announced on 12 February 2016.

Professor Geoffrey T. Fong of the University of Waterloo in Canada, Chief Principal Investigator of the ITC Project, said, “Our results show that smokers in Kenya are poor in knowing about the many deadly harms of cigarettes and other tobacco products compared to smokers in other countries. And the current text-only warnings are simply not effective in educating smokers and motivating them to quit and in convincing young people not to start. There is an urgent need for Kenya to implement large, pictorial warnings.”

“ITC evaluation studies in countries throughout the world show that switching from small text warnings to large pictorial health warnings significantly improves the effectiveness of the warnings. But their effectiveness decreases over time as smokers become overexposed to the same messages. Tobacco users in Kenya have had the same text warnings for 8 years – new pictorial warnings are long overdue”, Dr. Fong said. “There is overwhelming evidence showing the benefits of large pictorial warnings: increasing knowledge about the many harms of tobacco, motivating smokers to quit, and reducing the number of young people who start. We hope that the High Court will recognize the public health benefits of graphic warnings and other key tobacco control measures of the 2014 regulations.”

The ITC Kenya Wave 1 National Report can be downloaded at www.itcproject.org or www.health.go.ke

The evidence presented in the report is based on findings from the International Tobacco Control Policy Evaluation Project (ITC Project), the first-ever international cohort study to evaluate the psychosocial and behavioural effects of tobacco control policies and the only research project that focuses on measuring the impact of key policies of the WHO Framework Convention on Tobacco Control (FCTC), which has been ratified by 180 countries including Kenya. The ITC Project has conducted surveys of tobacco users and non-users in Kenya and 22 other countries beginning in 2002.

The ITC Kenya Wave 1 Survey was conducted from October to December 2012. Respondents were 1,427 adult tobacco users and 521 non-users sampled from 21 districts across 8 provinces. Findings from the ITC Kenya Survey and other ITC countries can provide policy-makers with evidence to guide the creation and implementation of stronger, evidence-based tobacco control policies.