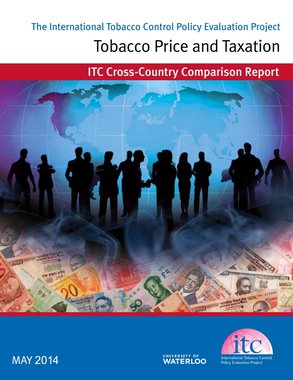 This report presents research findings and cross-country comparisons on key indicators of effectiveness of price and tax policies across countries of the ITC Project. A primary objective of the ITC Project, and of this report, is to disseminate findings on the effectiveness of tax measures to policy makers and other public health stakeholders to promote strong evidence-based policies on price and tax, as required by article 6 of the FCTC.

Increasing tobacco taxes and prices is recognized worldwide as the single most cost-effective measure of tobacco control. It: (1) reduces overall tobacco consumption and prevalence of tobacco use; (2) prevents initiation among youth; and (3) promotes cessation among current users. On average, a 10% price increase on a pack of cigarettes would be expected to reduce demand for cigarettes by about 2.5% to 5% in high-income countries and by 2% to 8% in low- and middle-income countries (LMICs), where lower incomes tend to make people more sensitive to price changes.

Professor Geoffrey T. Fong of the University of Waterloo in Canada, Chief Principal Investigator of the ITC Project, the international research collaboration that is evaluating the impact of the Framework Convention on Tobacco Control (FCTC) policies in 22 countries, said: “It is typical to find consumers and retail industry bodies complaining about tax rises on cigarettes, but price and taxation policies are very effective in influencing smokers’ behaviour and encouraging quitting. An effective tax policy can lead to higher real consumer prices (inflation-adjusted), which lower consumption and prevalence and thereby in turn reduce mortality and morbidity and improve the health of the population. It is estimated that tripling excise tax on cigarettes would, on average, double the retail price and decrease consumption by at least 30%, at the same time as it would increase tax revenue. This intervention would save 115 million lives by the year 2050. Our data – gathered from more than 20 ITC Project countries – underlines the importance of price and taxation strategies across low, middle and high- income countries.”

Dr. Douglas Bettcher, Director of WHO’s Department of Prevention of Noncommunicable Diseases (PND), commented: “For many years the tobacco industry has claimed that increased tobacco taxes leading to higher real prices do not improve public health but just encourage illicit tobacco trade. The findings of the ITC Project, however, reinforce existing evidence that taxes and prices do play a critical role in fighting the global tobacco epidemic. Taxing tobacco products in a manner that raises real prices is an effective and immediate way to reduce tobacco consumption: high prices driven by tax increases discourage young people from taking up smoking and encourage current smokers to either reduce their use of tobacco or quit altogether. We urge ministers of finance and ministers of health in every country to read this report and use taxation and pricing to reduce tobacco consumption and its consequences.”

The ITC Project findings support the recommendations for implementation of Article 6 of the FCTC which calls for: tax adjustment procedures that reflect price and income elasticity, inflation, and income changes; simplified specific excise tax systems; minimum pricing and tax harmonization on comparable products; and effective policies to tackle tax evasion. Increases in the price of cigarettes, through taxes, provide an incentive for current smokers to quit and a disincentive for new smokers to start. Tobacco price and tax increases encourage consumers to reduce spending on tobacco products and either invest the money in savings, or consume other goods and services considered more productive to the economy.

Main findings of the report

The main findings and recommendations of The ITC Cross-Country Comparison Report include:

In the past 12 years, cigarettes have become LESS affordable in 77% of the ITC high-income countries. In contrast, cigarettes have become MORE affordable over time in 63% of ITC low-and middle-income countries. This demonstrates that affordability of tobacco products is generally higher in low- and middle-income countries, where lower tobacco taxes, greater reliance on ad valorem taxes, more complicated tax structures, and cheaper alternatives to taxed cigarettes are available, and where incomes are rising at a faster rate than in high-income countries. In China, the ITC Project (Huang et al., 2014) found that 72% of people surveyed said that their current brand choice was determined by price. However, ITC China data showed that females and those with higher income and/or high levels of education were more likely to buy cartons of cigarettes. Huang et al. concluded that two effective ways to reduce consumption among low-income and heavy smokers in China would be minimum price laws set above current prices for the least expensive brands and policies that restrict discounts through buying cartons. Cornelius et al. (2014) used ITC US data to come to the same conclusion about minimum pricing laws. In Bangladesh, the ITC Project (Nargis et al., 2014) confirmed that people with lower socio-economic status (SES) were the most affected by price elasticity. The higher the price change, the fewer cigarettes they could afford to buy.

Cigarette prices can encourage quitting if tobacco is priced beyond affordability

A similar tax burden should apply to all tobacco products

The harmonization of taxes across different tobacco products to a uniform rate discourages downward switching, tax avoidance, and evasion. This is especially important in low- and middle-income countries where cheaper forms of tobacco products (e.g., bidis and smokeless tobacco in Bangladesh and India) can be purchased. Nargis et al. (2014) found that smokers in Canada and the US will choose discount brand cigarettes most frequently when there is a large price differential between budget and premium brands. ITC China data (White et al, 2014) showed that nearly 40% of Chinese smokers switched cigarette price tiers over time, indicating that consumers are not loyal to one brand and are influenced by price. Cornelius et al. (2014) used data from the ITC US Survey to show that those who can least afford to continue smoking because of their economic standing (i.e., low-income individuals) and health risks (i.e., older smokers and those who smoke more heavily) were also the group of smokers most prone to use and switch to discount brand cigarettes.

Governments need to implement the best structure of tobacco taxes

Specific excise taxes increase prices relatively more than ad valorem taxes, so they lead to relatively larger reductions in consumption. Countries that rely more heavily on the ad valorem component of total tax tend to have greater price variability than countries that rely more heavily on the specific component. This variability has been shown to lead smokers to trade down to cheaper brands and to increase their attempts to avoid taxes. The ITC Bangladesh Survey (Nargis et al., 2014) found that the retail price for a package of the most sold brand of cigarettes is the third lowest in the Southeast Asia region. The authors showed that the uniform specific tax system generated the highest price increases and decreases in the number of smokers and annual cigarette consumption, while highest revenue gain and tax share in the retail price occur under the uniform ad valorem tax system.

Heavier and more addicted smokers are more likely to engage in tax avoidance. Fix et al., (2014) and Belcher et al., (2014) propose that tax harmonization is important for curbing tax avoidance and evasion across areas with close proximity (i.e., the different states in the US and members of the European Union). Using ITC Europe data Nagelhout et al., (2014) found that cross-border tobacco purchasing rates varied by country, but that those people purchasing tobacco cross-border often had higher education and income. ITC Canada findings challenge the assumption that cigarette prices are the key driver of cigarette avoidance/evasion (Guindon, et al. 2014). Tax avoidance is prevalent in Quebec and Ontario, despite those provinces having the lowest cigarette tax rates in Canada. The findings suggest that proximity to opportunities for tax avoidance/evasion may be one of the key factors in this behaviour, as the majority of native reservations where discount cigarettes can be purchased are located in these two provinces.