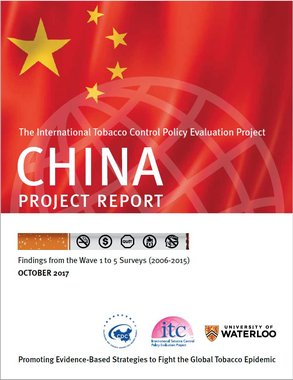 This report has been translated in Chinese.

This report evaluates China’s progress in the implementation of the FCTC and its guidelines, based on research conducted by the International Tobacco Control Policy Evaluation Project (the ITC Project) – an international cohort survey conducted in 28 countries, designed to evaluate the impact of tobacco control policies. Between 2006 and 2015, five waves of the ITC China Survey were conducted among a cohort of adult smokers and non-smokers in China (approximately 800 smokers and 200 non-smokers in each survey location at each wave). The ITC China Survey was developed by an international research team from Canada (University of Waterloo) and the Chinese Center for Disease Control and Prevention (China CDC). The Wave 1 to 3 ITC China Project Report was released in December 2012. This new Wave 1 to 5 Report assesses China’s progress in tobacco control up to 6 years later and 10 years after China ratified the FCTC, and compares China’s progress against other ITC countries around the world.

WATERLOO, Ont. (Wednesday, May 31, 2017): Despite signing a World Health Organization treaty on tobacco control over a decade ago, China is experiencing one million deaths per year from smoking, and more than half of the country’s 316 million smokers say they have no intention of quitting.

Details of China’s tobacco epidemic were presented in a report released today by the University of Waterloo’s International Tobacco Control Policy Evaluation Project (ITC) and China’s Center for Disease Control and Prevention (CDC) at a World No Tobacco Day event in Shanghai.

The ITC-China CDC report presented the results of a 10-year longitudinal study of 8,000 smokers and 2,000 non-smokers in 5 major Chinese cities and 5 rural areas.

“The ITC survey shows clearly that although China has made some progress in tobacco control, their progress on combatting the number one cause of preventable death, cigarettes, has been slow,” said Geoffrey Fong, founder of the 28-country ITC Project and professor of psychology at the University of Waterloo. “For 10 years, China has not taken actions to reduce smoking that have been shown to work well in many other countries.”

In addition to high rates of smoking and a low desire to quit, the ITC study also found that although awareness of the harms of cigarettes among smokers has increased in the past decade, it is still the lowest of any country surveyed by the ITC Project.

According to the survey, only 61 per cent of Chinese smokers were aware that smoking could cause heart disease, the lowest of any ITC country. The survey also found that secondhand smoke was present in 62 per cent of workplaces and 73 per cent of homes in China, the highest of 20 ITC countries.

“Smoking is the most important cause of chronic, non-communicable diseases, which account for nearly 90 per cent of deaths in China,” said Yuan Jiang, the director of the Tobacco Control Office of the Chinese Center for Disease Control and Prevention. “It is critically important for China to implement a national smoke-free law, pictorial health warnings on cigarette packages, and a complete ban on all forms of tobacco advertising.”

The ITC-China CDC Report includes recommendations for strengthening tobacco control efforts in China, including the implementation of a national smoke-free law, which has already successfully been implemented in key cities, including Beijing, Shenzhen, and Shanghai.

In addition to the need for pictorial warnings, the ITC-China CDC report also calls for a substantial increase in cigarette taxes, pointing to ITC data showing that cigarettes in China are extremely inexpensive and more affordable than in any other ITC country.

“It’s now time for policymakers in China to build on the steps it has taken and to move decisively to reverse the tobacco epidemic,” said Bernhard Schwartländer, WHO Representative in China. “Findings from the ITC-China CDC Report present a compelling case that more action needs to be taken in China in the interest of public health.”

The full PDF of the press release is available here.