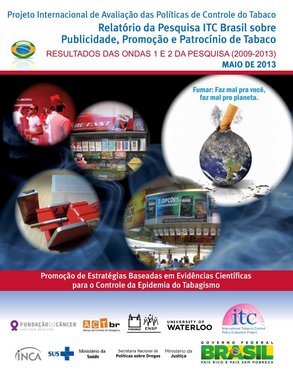 This report presents findings from two waves of the ITC Brazil Survey, which polled representative samples of smokers and non-smokers in three major cities between 2009 and 2013.

(Tuesday May 28th, 2013, Brasília, Brazil and Waterloo, Ontario, Canada): The International Tobacco Control Policy Evaluation Project (the ITC Project) today released the results of a four-year study (the ITC Brazil Survey) of the effectiveness of bans on tobacco advertising, promotion and sponsorship (TAPS) in Brazil. The release of the ITC Brazil Report on TAPS (the Report) is part of Brazil's events for World No Tobacco Day, which this year is focused on TAPS. The Report finds that incomplete and poorly enforced bans on TAPS mean that nearly a quarter of Brazilians still see marketing messages from tobacco companies at Point-of-Sale (PoS) displays, through corporate social responsibility initiatives run by the industry, on tobacco product packaging and in TV shows and films. Almost half of smokers (49 percent) and non-smokers (45.4 percent) agree that tobacco companies should be required to sell cigarettes in packs with only the brand name and health warnings, but without colorful designs on the rest of the pack.

In many ways, Brazil has been at the forefront of tobacco control. It first passed legislation to restrict tobacco advertising in 1988. It was the first country to ban misleading descriptors like “mild” and “light” in 2001 and in the same year it became the second country to adopt pictorial warnings on cigarette packs. Brazil ratified the Framework Convention on Tobacco Control (FCTC) – the world’s first public health treaty - in 2005. However, gaps remain in Brazil’s implementation of the FCTC Guidelines; e.g. the protocols to enforce a 2011 ban on tobacco industry advertising at PoS have not yet been agreed and the ensuing lack of enforcement has enabled the tobacco industry to continue developing its presence at PoS.

PoS advertising has a particular impact on youth. A 2008 survey of 12-16 year-olds commissioned by ACTbr found that 63 percent said that seeing cigarette products displayed at PoS might make them feel like smoking a cigarette. An ACTbr study in 2010 in Sao Paulo found that the majority of retail outlets selling cigarettes were found within 1 kilometer of an elementary school or high school. In 83 percent of these establishments, cigarettes were displayed close to candy products and the visibility of tobacco displays to children was found to be higher in stores near schools than those further away from schools. A 2011 ACTbr study found that 78 percent of Brazilians agree that shops should be banned from exposing cigarettes for sale where they could be seen by children and youth. Similarly, the ITC Brazil Survey found that 83 percent of smokers and 89 percent of non-smokers agree that tobacco products should be more tightly regulated.

Dr. Marcos Moraes, President of Brazil Cancer Foundation (Fundação do Câncer), commented: “We know that 15 percent of male deaths and 6 percent of female deaths in Brazil are related to tobacco use. To replace those who die because of its deadly product, the tobacco industry must recruit new smokers and this report makes it clear that the incomplete ban on TAPS is helping the industry specifically target youth. If we want to try to prevent youth from initiating smoking, if we want to reduce the high rate of mortality and morbidity associated with tobacco, then we must be more effective in reducing the industry’s ability to promote itself in a favorable way. We must move further to prohibit the exposure of cigarette packs in retail outlets and implement plain packaging, following the positive example of Australia.”

Dr. Antonio Santini, Director of the Brazilian National Cancer Institute (INCa) and Vice-President of the National Commission for the Implementation of the Framework Convention on Tobacco Control (Comissão Nacional para Implementação da Convenção-Quadro para o Controle do Tabaco (Conicq)), added: “For several years, Brazil was at the forefront of tobacco control both in Latin America and across the world. Others followed our example in introducing restrictions on tobacco advertising, banning misleading descriptors like ‘mild’ and ‘light’, and implementing highly graphic, disturbing warning images on cigarette packs. Yet our piecemeal approach to banning the tobacco industry from advertising and promoting itself – whether through Point-of-Sale or sponsorship or supposed Corporate Social Responsibility initiatives – has given tobacco companies loopholes through which they can continue to reach smokers and non-smokers – and particularly youth. Surveys show that the people of Brazil want to protect their children and youth from initiating smoking. We must respond to that wish by properly enforcing the existing laws and introducing new regulations to block the other gaps in our implementation of the FCTC.”

Professor Geoffrey T. Fong of the University of Waterloo in Canada, Chief Principal Investigator of the ITC Project, the international research collaboration that is evaluating the impact of Framework Convention on Tobacco Control policies in 22 countries, said: “Brazil is an excellent example of how the tobacco industry seeks to overcome tobacco control regulations by lobbying governments to disrupt effective enforcement and by investing heavily in indirect marketing tactics. It seeks to normalize tobacco, making cigarettes seem like any other consumer product - even candy products, to encourage youth to initiate smoking. Similarly, the industry has been very creative in using colors, graphics and brand names to overcome the ban on descriptors on cigarette packaging and has invested in lit display units to attract attention at Point-of-Sale. We recommend that Brazil implement a full Point-of-Sale display ban, plain cigarette packaging, a ban on brand descriptors including words and numbers, and unpaid placement of tobacco products in TV, films and other media. Our survey findings indicate that there is strong support among smokers and non-smokers for the Brazilian government’s continued active role in tobacco control to close the gaps that currently exist. In addition, we would encourage the full enforcement of existing TAPS bans, including sponsorship, so Brazil fulfills its obligations with regard to Articles 11 and 13 of the Framework Convention on Tobacco Control.”