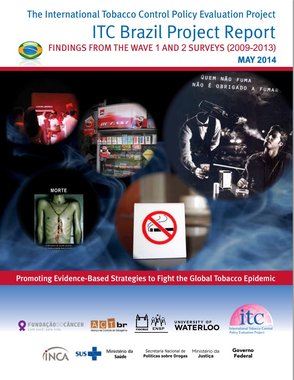 This report presents findings from the first two waves of the ITC Brazil Survey (2009-2013). The focus of this report is to inform tobacco control policy development by evaluating the effectiveness of policies as they are implemented in Brazil over time. Comparisons with other ITC countries are also drawn.

This report has also been translated in Portugese.

National smoke-free law and increased anti-tobacco marketing, including pictorial warnings on the front of the pack, are needed to help Brazil reduce economic and health burden of tobacco-related illness and death

(Friday, 30 May 2014, Waterloo, Ontario, Canada and Brasilia, Brazil):  A report released today at the Pan American Health Organization (PAHO) World No Tobacco Day event in Brasilia, Brazil, reveals that Brazil needs to address key gaps in its tobacco control policies in order to reduce the economic and health burden of tobacco use. The report, entitled “ITC Brazil Project Report: Findings from the Wave 1 and 2 Surveys (2009 – 2013)”, was produced by the International Tobacco Control Policy Evaluation Project (the ITC Project), centered at the University of Waterloo, in partnership with the National Cancer Institute (INCA), the National Secretariat for Drug Policy (SENAD), and the Cancer Foundation, with support from Oswaldo Cruz Foundation (Fiocruz), and the Brazilian Alliance for Tobacco Control (ACTbr).

The Report finds that while Brazil has demonstrated its commitment toward tobacco control by ratifying the World Health Organization (WHO) Framework Convention on Tobacco Control (FCTC) in 2005, there are gaps in the country’s tobacco control policies, such as:

-       Brazil has not yet regulated a national comprehensive smoke-free law

-       Brazil’s point of sale advertising ban for tobacco products has not yet been fully enforced, enabling the tobacco industry to continue to promote its products at this critical venue

-       Brazil has not yet implemented the Article 11 guidelines for effective health warnings, which call for pictorial health warnings covering a minimum of 50% of the front and back of the pack.

-       There is a lack of regular national mass media campaigns to communicate the dangers of tobacco use and create support for tobacco control policies, like smoke-free laws.

Brazil has achieved several notable successes in tobacco control according to surveys conducted in 2009 (Wave 1) and 2012-13 (Wave 2) in Rio de Janeiro, São Paulo, and Porto Alegre:

1.     Workplaces that have a complete smoking ban in effect have significantly increased and smoking in bars and restaurants has significantly decreased in all three cities, indicating strong compliance and support for the smoke-free laws in effect in these cities.

2.     Support for a ban on smoking indoors at Olympic venues is strong – over 74% of smokers and over 83% of non-smokers agreed with this restriction.

3.     Cigarettes have become less affordable in Brazil, and around half of smokers have either considered quitting or reducing cigarette consumption as a way to save money.

4.     The number of smokers receiving referrals to a service that could help them quit has nearly doubled.

5.     A quarter of Wave 1 smokers who were re-interviewed in Wave 2, were successful in quitting smoking.

Tânia Cavalcante, Executive Secretariat of the National Commission for Implementation, National Cancer Institute of Brazil, Ministry of Health said, “The ITC Brazil Survey findings provide an important and comprehensive roadmap for guiding successful tobacco control policies, and will contribute to strengthening governmental efforts to regulate this lethal product. Brazil has been working hard to reduce the prevalence of smoking and the burden of tobacco consumption, especially among youth and low income people. We are on course, but there are many challenges to overcome. The ITC Survey is a useful tool to guide the advances needed to curb the smoking epidemic and to evaluate the effects of global tobacco control.”

Marcos Moraes, Chairman of the Board of Trustees of the Cancer Foundation, said: “Tobacco consumption continues to burden the Brazilian Public Health System, causing 130,000 deaths and 30% of cancer deaths every year. While progress has been made, we could do more. For example, the percentage of smokers and non-smokers who own smoke-free homes is still low. Regional policies have resulted in over 80% of workplaces being totally smoke-free. These numbers could be even better if a national law was enacted and enforced, supported by permanently financed mass-media campaigns about the dangers of secondhand smoke. We are certain that the ITC Brazil Survey findings will contribute to the formulation of effective tobacco control policies, both in Brazil and internationally.”

Brazil is the largest country in South America, with a population of approximately 200 million. Over a fifth (21.6%) of men and 13.1% of women are smokers, while fewer than a tenth (9.2%) of boys (age 13-15) and 13.2% of girls (age 13-15) identify themselves as smokers. More recent Ministry of Health surveys, conducted in Brazilian capital cities and the federal district (a total of 27 cities), report a continuing decline in smoking prevalence in adults over 18 years from 15.6% in 2006 to 12.1% in 2012. These surveys also reported higher prevalence rates in males, smokers with 8 or less years of education, and smokers in the southern tobacco growing region of Brazil.

Professor Geoffrey T. Fong of the University of Waterloo in Canada, Chief Principal Investigator of the ITC Project, the international research collaboration that is evaluating the impact of the Framework Convention on Tobacco Control policies in 22 countries, said: “Brazil is at a crossroads in tobacco control. Although the country’s history of implementing strong tobacco control policies has led to some successes, which is apparent from the decline in prevalence,  we have seen major policies be delayed or challenged by the tobacco industry in recent years. Given Brazil’s previously strong record on health warnings, it is dismaying that the pictorial warnings have not been revised for several years. Indeed, the next proposed set of warnings will not be implemented until 2016, and even then there will be no pictorial warning on the front of the pack, only on the back. This omission flies in the face of clear evidence about the importance of smokers being regularly and frequently exposed to graphic images of the harms of cigarettes and about the much greater importance of the front of the pack in being visible to the smoker. In addition, the tobacco industry is continuing to market its products through point of sale displays and entertainment media, and is fighting a proposed ban on flavourings and additives, in order to continue producing products that are especially appealing to youth. We hope this report will help to inform and strengthen future policy decisions to meet the challenges of the tobacco industry so that Brazil can maintain its long-standing leadership in fighting tobacco use, the most important preventable cause of death and disease in Brazil and throughout the world.”

Other key findings of the report

·       The majority of smokers agree that tobacco products should be more tightly regulated (88% in Rio de Janeiro, 87% in Porto Alegre, and 75% in São Paulo)

·       At Wave 2, 47% of smokers in Brazil avoid looking at warning labels on cigarette packages, up from 41% at Wave 1 – more than smokers in most of the other ITC countries

·       About half of the smokers in each city agree that cigarettes should be sold in plain packaging.

·       The survey results indicate that 35% of menthol smokers believe their brand is less harmful, supporting the government’s decision to ban all flavourings in cigarettes

·       The majority of smokers (80% to 95% depending on the health effect) are aware of most health effects and diseases caused by smoking (e.g. lung cancer, heart disease, and premature aging)

·       There is high awareness of the harm and danger of secondhand smoke according to the percentage of smokers who believe that smoking causes diseases in non-smokers (e.g., asthma in children (88%) and lung cancer in non-smokers (79%)

·       A lower percentage of male Brazilian smokers (20%) believe that smoking has not at all damaged their health, in comparison to male smokers in Mexico (29%) and Uruguay (29%)

·       Most Brazilians (65% of smokers and 83% of non-smokers) agree that watching actors smoke encourages viewers to smoke.

The report recommends key strategies to strengthen tobacco control in Brazil, including:

2.     Reinforce mass media campaigns to increase awareness of of the harms of secondhand smoke and the need for smoking bans in public places and in the home

3.     Ban smoking in cars with children

6.     Ban the labelling of tar and nicotine levels on the pack

7.     Regulate the ban on menthol and other flavourings in tobacco products

8.     Implement regular, innovative, public health campaigns about the harmfulness of smoking and to encourage quitting

10.  Regulate and enforce the point of sale advertising ban and extend the law to the ban on product display

11.  Regulate the appearance of smoking in movies and on TV to reduce the tobacco industry’s ability to market its products, particularly to youth.