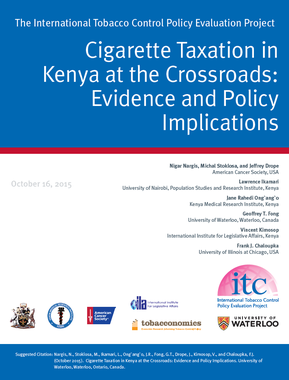 Oct 1, 2015 | Cigarette Taxation in Kenya at the Crossroads: Evidence and Policy Implications | English

This Report analyses the facts about the economics of cigarette taxation in Kenya and project the effects of recent proposed cigarette tax policy changes on tax revenue and public health.

This Report analyses the facts about the economics of cigarette taxation in Kenya and project the effects of recent proposed cigarette tax policy changes on tax revenue and public health. In June 2015, Kenya attempted to simplify the cigarette excise tax structure by introducing a uniform specific rate of KShs. 2500 per 1000 cigarettes or KShs. 50 per pack (Excise Duty Bill, 2015). Compared to the previous system, this shift would have implied a 1% increase in the excise rate for premium brands (e.g. Dunhill and Embassy), a 37% increase for mid-price brands (e.g. Sportsman, Sweet Menthol, and Safari), and an 81% increase for economy brands (e.g. Rooster, Super Match, and Rocket). On 27 August 2015 Parliament passed an amendment to the Excise Tax Bill by reinstating the tiered specific excise system for cigarettes based on package characteristics and retail selling price again as it prevailed prior to 2011. The idea is to create a tax structure favorable to the poor smokers. However, the President recommended reinstating the originally proposed uniform specific excise of KShs. 2500 per mille of cigarettes. Kenya now stands at the crossroads.  If the uniform specific excise initially proposed in the Excise Duty Bill 2015 is implemented, then Kenya would stand out globally as a country with a tax system that is consistent with best practices. In contrast, if Kenya were to reinstate the tiered specific excise system, as proposed by the Amendment to the Bill, the Report estimates that the Kenyan economy would suffer in two ways: (1) greater health cost burden from increased cigarette smoking, and (2) substantially lower revenue potential, which could be as large as nearly KShs. 67 billion over the ten-year period.