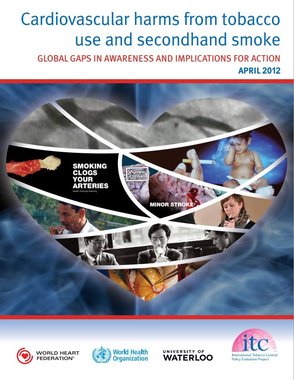 Apr 1, 2012 | Cardiovascular Harms from Tobacco Use and Secondhand Smoke: Global Gaps in Awareness and Implications for Action | English

A report released April 20, 2012 at the World Heart Federation World Congress of Cardiology in Dubai reveals significant gaps in public awareness regarding the cardiovascular risks of tobacco use and secondhand smoke. The report, entitled "Cardiovascular harms from tobacco use and secondhand smoke", was commissioned by the World Heart Federation and written by the International Tobacco Control Project (ITC Project), in collaboration with the Tobacco Free Initiative at the World Health Organization.

According to the report, half of all Chinese smokers and one-third of Indian and Vietnamese smokers are unaware that smoking causes heart disease.  Across a wide range of countries, including India, Uruguay, South Korea and Poland, around half of all smokers - and over 70 per cent of all Chinese smokers - do not know that smoking causes stroke. Awareness of the risk of secondhand smoke is even lower. In Vietnam, nearly 90 per cent of smokers and non-smokers are unaware that secondhand smoke causes heart disease.  In China, 57 per cent of smokers and non-smokers are unaware of the link.  Even in countries with well-developed health systems and tobacco control regulation - such as Canada, the United Kingdom, the United States, and Australia - between a third and a half of smokers do not know that secondhand smoke can damage cardiovascular health.

Professor Geoffrey T. Fong at the University of Waterloo, Canada, and Chief Principal Investigator of the ITC Project, commented, "This report shows a broad correlation between poor knowledge of the risks of tobacco use and high levels of smoking prevalence. To break this link and reduce the deadly toll of tobacco, more needs to be done to increase awareness of the specific health harms. Our research shows that the risks of tobacco use to lung health are very widely accepted. But we need to attain the same level of knowledge and awareness that tobacco use can cause heart disease, stroke, and peripheral vascular disease and secondhand smoke can cause heart attack. Health warning labels are known to be an effective method for educating the public on the health harms of tobacco products. A number of countries have introduced warnings about the increased risk of heart disease or heart attack, but no country has yet implemented a label to warn people that secondhand smoke causes heart disease. Increasing knowledge of these specific health risks will help encourage smokers to quit and help non-smokers protect themselves, so raising awareness is an important step in reducing people's exposure to tobacco smoke."

Johanna Ralston, CEO of World Heart Federation, commented: "If people don't know about the cardiovascular effects of tobacco use and secondhand smoke exposure, they cannot understand how much or how quickly smokers are endangering not only their own lives, but those of family members, friends, co-workers or other non-smokers who breathe tobacco smoke. In countries like India or China, so many people are at high risk for heart attack or stroke, and it strikes at a relatively early age: risks of CVD are far more present and immediate than most of the better-known fatal effects of tobacco use and secondhand smoke exposure. Knowing about cardiovascular risks of tobacco will help smokers take quitting seriously, and encourage people to demand and comply with policies that protect everyone from the harms of tobacco. The World Heart Federation calls on governments around the world to a make these policies an immediate priority, as they committed to do last year through the Political Declaration of the United Nations' High-level Meeting on the Prevention and Control of Non-communicable Diseases."

Dr. Douglas Bettcher, Director of the World Health Organization's Tobacco Free Initiative, noted that, "This report provides conclusive proof that the level of information people have about the cardiovascular harms of tobacco use and secondhand smoke is still insufficient and therefore mass media campaigns and warnings are urgently needed to make people aware of these lethal harms. In fact, to avoid the enormous toll of needless deaths caused by tobacco use, a special UN high level meeting on non-communicable diseases recently called upon Parties of the WHO Framework Convention on Tobacco Control (WHO FCTC) to accelerate implementation of this Convention, recognizing the full range of measures, including measures to reduce tobacco consumption and availability. I hope that this report will boost the sense of urgency that world leaders and the public health community are trying to instill into the implementation of the WHO FCTC.  This will mean the difference between death and life for almost six million people each year."

The report, which presents data from two major global tobacco research and surveillance studies - the Global Tobacco Surveillance System (GTSS) and the ITC Project - recommends three steps to reduce the current and future cases of CVD due to tobacco use - which may total over 100 million people - among the one billion people throughout the world who smoke today, and of their families exposed to secondhand smoke: