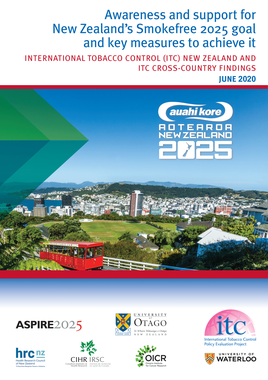 In March 2011, the New Zealand Government became the second in the world to adopt an ‘endgame’ goal for smoking, with a specific target to achieve a smokefree nation by 2025. Since then, however, there has been no organised effort to promote or explain the goal and only limited policy measures have been implemented to support its achievement. Current smoking prevalence trends suggest that the goal will not be achieved, particularly for Māori and Pacific peoples. In response to limited progress, the ‘Achieving Smokefree by 2025’ (ASAP) strategy ─ which sets out a comprehensive action plan for achieving the Smokefree goal ─ was developed by the smokefree sector in 2017.

This report summarises evidence from the International Tobacco Control (ITC) Policy Evaluation Project on awareness and understanding of the Smokefree Aotearoa goal, and the degree of support for key measures to accelerate its achievement. Data from smokers and quitters in New Zealand collected from 2016 to 2018 is presented in context with data from smokers in up to 13 other ITC Project countries. The report also compares findings between Māori (the indigenous population of New Zealand) and non-Māori participants.