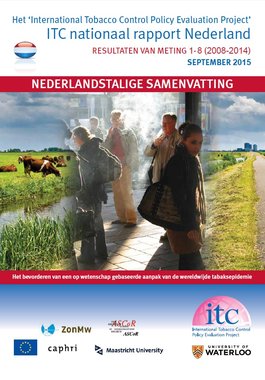 This report evaluates the effectiveness of the Netherlands’ implementation of the FCTC. The findings are based on research conducted by the International Tobacco Control Policy Evaluation Project (the ITC Project) – an international comparative cohort survey conducted in 22 countries, designed to measure the impact of tobacco control policy measures on tobacco users over time.

WATERLOO, Ont. (12, September 2015) – Dutch smokers, after years of tobacco control policies, are generally unconcerned about the dangers of smoking and second hand smoke, according to an international comparative study published today.

The International Tobacco Control Policy Evaluation Project (ITC Project) led by Professor Geoffrey T. Fong from the University of Waterloo, presented their findings in Maastricht at the European meeting of the Society for Research on Nicotine and Tobacco.

Compared with fifteen other countries studied, the Netherlands has the lowest percentage of smokers reporting that they often think about the harm of smoking to themselves (22%) or to others (9%). Moreover, fewer Dutch smokers than smokers in other countries realize that heart disease, stroke and lung cancer can be caused by smoking or that heart disease in non-smokers can be caused by exposure to second hand smoke.

In 2005 the Netherlands signed the World Health Organisation’s Framework Convention on Tobacco Control—the first-ever health treaty--obligating the country to take measures to reduce smoking. The ITC Project findings reveal that tobacco control policies in the Netherlands are not as effective as policies elsewhere in the world.

“Only 21% of smokers in the Netherlands have negative attitudes toward smoking, which is the second lowest among thirteen countries the ITC Project is studying,” said Professor Fong from Waterloo’s Department of Psychology. “The Dutch have a relatively poor understanding of the dangers of smoking and exposure to second hand smoke, which is disturbing.”

The comparative study by the ITC Project measured a cohort of more than 2,000 Dutch smokers against others from around the world. The project found that smokers around the world had a better perception of the risks associated with smoking.

“We are concerned that the poor understanding of the risk of smoking in the Netherlands is directly connected to a near-absence in education campaigns over the past five years,” said Fong.  “We are calling on the Dutch government to make new and stronger investments in educational campaigns to reduce tobacco use.”

About the University of Waterloo
In just half a century, the University of Waterloo, located at the heart of Canada's technology hub, has become one of Canada's leading comprehensive universities with 35,000 full- and part-time students in undergraduate and graduate programs. A globally focused institution, celebrated as Canada’s most innovative university for 23 consecutive years, Waterloo is home to the world's largest post-secondary co-operative education program and encourages enterprising partnerships in learning, research and discovery. In the next decade, the university is committed to building a better future for Canada and the world by championing innovation and collaboration to create solutions relevant to the needs of today and tomorrow. For more information about Waterloo, please visit uwaterloo.ca.

About the ITC Project
The International Tobacco Control Policy Evaluation Project (the ITC Project) is an international research collaboration involving over 100 tobacco control researchers and experts from 22 countries (Canada, United States, United Kingdom, Australia, Ireland, Thailand, Malaysia, China, South Korea, New Zealand, Mexico, Uruguay, France, Germany, The Netherlands, Brazil, Mauritius, Bangladesh, Bhutan, India, Kenya, and Zambia) who have come together to conduct research to evaluate the impact of tobacco control policies of the WHO Framework Convention on Tobacco Control (FCTC), the world's first health treaty. These policies include more prominent warning labels (including graphic images), comprehensive smoke-free laws, restrictions or bans on tobacco advertising, promotion, and sponsorship, higher taxes on tobacco products, removal of potentially deceptive labelling (e.g., "light" and "mild" and packaging design that lead consumers to the misperception that certain brands may be less harmful), promotion of cessation, public education on the harms of tobacco, reduction of illicit trade, reduction of youth access, and product regulation. In each country, the ITC Project team conducts longitudinal cohort surveys and capitalizes on natural experiments to evaluate the impact of these policies over time. ITC Surveys contain over 150 measures of tobacco policy impact and have been conducted in countries inhabited by over 50 percent of the world's population, 60 percent of the world's smokers, and 70 percent of the world's tobacco users. Reports can be downloaded at www.itcproject.org

Attention broadcasters: Waterloo has facilities to provide broadcast quality audio and video feeds with a double-ender studio. Please contact us to book.